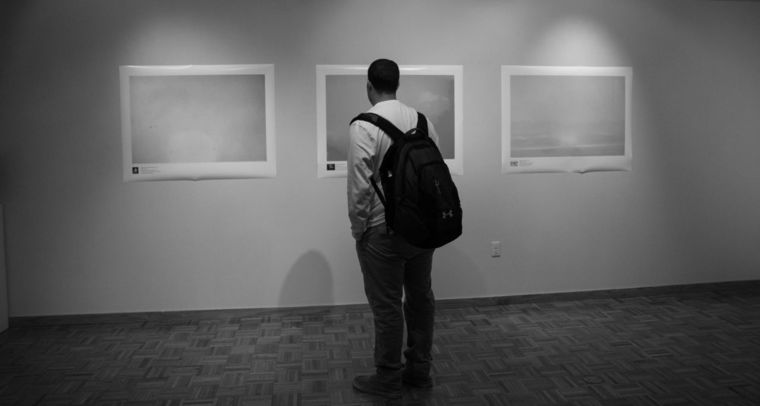 Colors
Cameron Cosey observes Brandon Bauer’s exhibition “The Colors I Cannot Explain,” which was on display in the Annex Gallery from Oct 1 until Oct. 27

The Annex Gallery in the Arts and Communication Center welcomed Brandon Bauer’s “The Colors I Cannot Explain,” which opened on Oct. 1 and ended on Oct. 27.

Brandon Bauer is an artist based out of Wisconsin. He received his Bachelors in painting from the Milwaukee Institute of Art and Design and his Masters from UW-Milwaukee. He is currently an assistant professor of art at St. Norbert College in De Pere, Wis. He has also had work exhibited and screened nationally and internationally.

Craig Clifford, UW Oshkosh art teacher and a member of the gallery board, saw one of Bauer’s previous exhibitions.

“Brandon is based in Wisconsin, he teaches at St. Norbert’s in De Pere, and I had seen one of his exhibitions at The Frank Juarez Gallery in Sheboygan,” Clifford said.

Capitalism, democracy, war, consumerism and critical histories embedded in cultural ephemera are some themes that his work is derived from.

‘The Colors I Cannot Explain’ examines the history of nuclear weapons, and creating work based upon material sourced from public archives.

The exhibition is three projects brought together for the first time. There are two channel installations, “The Colors I Cannot Explain,” a section of work from the series ‘1000 Suns’ and a single channel video, ‘AN602: Tsar Bomba.’

‘The Colors I Cannot Explain’ is about above ground nuclear testing conducted by the U.S. Bauer has examined the history of nuclear warfare.

“The work on display is an extension of a recent project I have undertaken critically examining the history of nuclear weapon,” Bauer said. “The print work is from a series titled ‘1000 Suns,’ which is an ongoing project of archival photo documentation of above ground nuclear tests conducted by United States. To date I have 75 pieces, 10 of which are on display in the gallery, and the project is currently ongoing.”

All of the images shown in the gallery were not manipulated. The colors come from the natural wear of the film as well as compression into video files. The images were captured at the brightest part of the explosion.

“The images were captured from archival test film from each of the individual nuclear tests,” Bauer said. “Some of the color comes from the age and nature of the film stock used to record the tests, as well as the compression of those analog film formats into digital video files. In developing the project, I captured the images of the above ground nuclear tests at the moment of the brightest explosive flash on the test film.”

“Each print in the series pairs the minimal image of the explosive flash with a reference image of the mushroom cloud produced by the test,” Bauer said. “The minimal images of these explosions, visually and metaphorically, address the limits of vision inherent in the development and deployment of these weapons. The project was initiated with a desire to create a more nuanced, contemplative, and anti-spectacular image of nuclear weapons.”

“I thought it was interesting,” Cosey said. “It was cool how he had the sounds of nothingness incorporated with the images. The sounds were what you would think of when you think of a place being bombed; the sound echoes. You look at all these cool looking mushroom clouds, and then you realize it’s a bomb. The part showing the effects of the bombs, it showed the terrible effects of bombing.”

Another student, Andrew Kopecky, said he found Bauer’s work to be fascinating because he didn’t know the amount of color an atomic bomb gave off.

“I found it intriguing,” Kopecky said. “It was a good representation of color towards the bomb. I didn’t know there could be so many colors during an atomic bomb. I also liked how there was projections that showed the destruction of what bombs could do to a place and the people, it is horrific.”

Kopecky said how the colors were what interested him the most.

“The colors themselves were the knowledge I took out of it. I didn’t know such beauty could come out of something so destructive.”