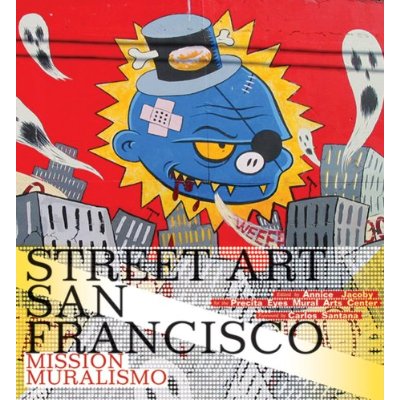 I just found out a piece I did in the Clarion Alley in San Francisco back in 2000 has been documented and included in a new book titled “Street Art San Francisco: Mission Muralismo“.

The title is a little misleading because the book only deals with work in the Mission District rather than the whole of San Francisco, but it has great history on the murals of the Chicano movement that are found throughout the district as well as the famous mural alleys- Balmy and Clarion.

The book delves in to the history of the Clarion Alley Mural Project (CAMP), and also looks at the artists of what has come to be known as the “Mission School”- including artists like Barry McGee, Margaret Killgallen, Chris Johanson, and others. Beyond that there are photos by a whole slew of great artists like Swoon, the San Francisco Print Collective, Ester Hernandez, the Billboard Liberation Front, and Claude Moller. It is a very good mix of street art, graffiti, and mural painting both historic and up to date, and the book is well researched and documented with some very good essays.

Click here for a link to a review of the book on the Brooklyn Street Art site by Josh MacPhee.