Master-List 2000 is hosting the animated gif’s created by A. Bill Miller and I for the Make Your Own History exhibition held at the Blatz Building in downtown Milwaukee in the spring of 2008. 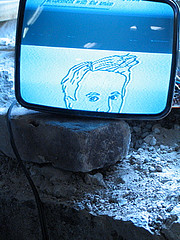 Here is a re-post from Bill’s blog:

Beer Barons & Brewery Workers
I’ve finally had a minute to put together a site for the Beer Barons & Brewery Workers project I did last Spring with Brandon Bauer. The work was presented at the Blatz Building in Milwaukee as part of the Make Your Own History group exhibition. This site is more in lines with what we originally intended for the project.

The gifs act as a portrait across time of two important moments in the history of Milwaukee.

Its made of 15 animated gifs, one for each of the 15 Beer Barons/ Breweries that were in operation in Milwaukee at one time. This was the rise of Milwaukee industry and how the city became what it is.

The texts come from Milwaukee newspaper coverage of Brewery Union Workers strike that, according to some local historians, eventually lead to the end of beer brewing in Milwaukee. This in turn lead to the departure of industry and jobs from Milwaukee and effects how the city became what it is now.

The gifs act as a portrait across time of two important moments in the history of Milwaukee.