The following is a re-posting of an interview of me conducted by Nathaniel Stern for his Implicit Art blog, and was cross posted on the My Arts Space blog. The interview is the first in a series of MFA student features from the graduate program at the Peck School of the Arts, at the University of Wisconsin – Milwaukee.

Brandon Bauer is a multi-disciplinary artist living and working in Milwaukee, Wisconsin. His work explores how the strategy of collage creates or obscures meaning. Brandon’s art has been exhibited in the Aces(s) electronic media festival in Pau, France, The European Media Arts Festival in Osnabruck, Germany, and at Project 101 in Paris among several other national and international venues. His work has been produced in DVD editions, used as illustration for various editorial publications and books, and has been published in poster editions. Brandon has recently completed his MA at the University of Wisconsin-Milwaukee, and is currently pursuing his MFA with a focus on intermedia. Brandon is an adjunct Time Based Media faculty member at the Milwaukee Institute of Art and Design.

Talk about your current practice. What do you make and why is that important to you?

In many ways I consider myself a collage artist, although I have an expanded definition of what collage is or can be. The products of the mediated world are my material starting point. It has only been in the last few years that I have fully embraced the concept of collage as my medium, and recognized the need for me to confront mediated images directly. I became aware in the last few years that I had always been responding to mediated forms in my work, and with that recognition, I found that I needed to work with these forms in a direct way. My recent exhibition Words Are Not Enough at the Inova/Arts Center Gallery in Milwaukee was a critical examination of the products of the media sphere as well as different ways in which to work with them, analyze them, break them down, recombine them, unform them, and manipulate them. The exhibition was an investigation of ideology and the construction of discourse in the media as well as a critique of these operations. 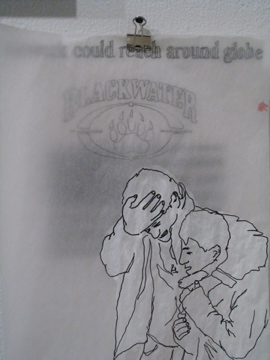 Images and details from the Words Are Not Enough exhibition, Inova/Arts Center Gallery at the University of Wisconsin-Milwaukee, Fall 2008

What got you to this point? What were you doing or making before, and how did that lead you to this kind of production?

I realized I had always been responding to the media in one way or another, and collage has been a constant component in my work, so in the last few years I decided to really concentrate on these forms, strategies, and methods. I think I first realized I was responding directly to media and mediated images in the 1990’s when the images surfaced of the emaciated prisoners in the camps during the war in the Balkans. After seeing those images I began working on a series that came to be called Hungry Ghosts; the series encompassed paintings, drawings, and mixed media works that all depicted tall, withered, cadaverous figures. The collage element came into the works as newspaper pages and headlines buried in the paint so that they could only be seen or revealed by looking closely at the work. 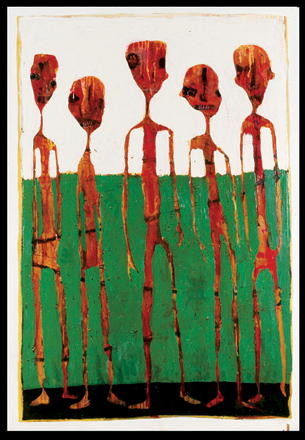 The biggest change in my work came as a result of 9/11 and the invasions of Afghanistan and Iraq. Those events really made me reassess the role of art and the need to find a more responsive critical practice. Working on an oil painting for a month in the seclusion of the studio was not going to allow me the kind of direct critical response that I felt was necessary in face of the rush to war that occurred. It was actually quite an empowering moment to be an artist, I wasn’t the only one to feel that way, and that is what made it so empowering- there was an amazing surge of artistic activity as artists all over the world attempted to put their talents in the service of a critical response to the rush to war by the Bush administration. I was very fortunate to co-edit a book called Peace Signs: The Anti-War Movement Illustrated, that chronicled the worldwide graphic response to the march to war by the United States. The Spanish language version of the book won the Ciutat prize for design in Barcelona for the year 2003. This was the first time that this massive surge of creativity was mounted to try to stop a war before it had even started. Most anti-war art historically has been made during ongoing conflicts, or when specific atrocities came to light, or in the case of graphic works like Goya’s Disasters of War, or Otto Dix’s Der Krieg, made years after the fact. Anyway, it was during this time that I tried to find a more responsive critical practice, and looked for different ways of getting the work out there into the world. I did a number of flyers and stickers to be placed directly on the street, and started doing illustrations for publications like Clamor Magazine and Earth First!, as well as working with other activist based art groups like Visual Resistance and Justseeds. All of this made me think more critically about the function of art, and eventually led me to work with media as a material in a more specifically critical way.

More Dead and Wounded Everyday sticker and placement, created to mark the 1,000 U.S. casualty in the Iraq war, 2004

Who inspires you – that you know personally, as well as historically or in contemporary practice?

I am constantly inspired by my friends and so many of the people around me and what they do. Colin Matthes is a good example. He is insanely productive and an immense talent; his last exhibition, War Fair: Occupation Games for Citizens and Non-Combatants, was astounding – a combination of interactive carnival games as a critique of contemporary warfare. Colin and I collaborated on an exhibition in 2007 called Over There, which brought together work we had both been producing independently as well as collaborative art we made specifically for that show. I think that collaboration opened up avenues and possibilities for both of us that we have continued to expand upon in our own ways. I love collaborative projects in general; that kind of work always motivates me and inspires me.

As for historic inspirations, I always come back to the collage and photomontage work of the Dada artists as well as the Neo-Dadaist assemblage work like Rauschenberg’s “combines” and the work of Bruce Connor. I consistently find new ways to appreciate the work from these two periods on many different levels. As for contemporary artists, I am very interested in the work of Thomas Hirschhorn, especially his public monuments, and the work of Cady Noland really intrigues me. I respond to the fearlessness of Hirschhorn’s work, and the fact that he takes the general public seriously as readers of philosophy. I love the innate democratic quality of his public art, and the fact that he is unafraid to confront theory with praxis. I am intrigued by Noland’s work with appropriated materials and her investigation of the undercurrent of violence in the American character. She is an artist whose work I want to spend more time with. My list of inspirations could really go on forever. I try to absorb everything I can, am an omnivorous reader and always hungry visually. Lately I have been reading a lot of Jacques Rancière – his analysis of montage informed a lot of the work in my last exhibition, and I have recently picked up some of his non art-related critical writing on democracy, to see where it might lead me.

Tell us about your favorite and least favorite works of art from your entire repertoire – why they deserve those titles and what you learned from them.

Least favorite… that is honestly a very difficult question for me because I get something out of everything I make, successful or not. I tend to rework things endlessly so a piece I am not happy about may get cut up and recombined into a new work, or may be worked over until it feels right. It’s like Colin said as we were collaborating on work for the Over There exhibition, and I’m paraphrasing him: “either it’s going to be great or I’m going to run it into the ground- there is no in-between”… That’s basically it, I’m either going to make it work or create an absolute disaster. Usually my unsuccessful pieces get re-purposed or reworked into new pieces. Art is a fluid process for me, and in that way there are no real failures… I almost wish I would make a spectacular disaster- it may be my greatest work!

As for my favorite, that’s hard too… I guess I would have to say I really love the work I was doing in 2006, because that work was a point in which all of my concerns started coming together. I am particularly fond of much of the collage work I did then, as well as the video work in the short/cuts series, which was a series of 30 short videos experimenting with a variety of different aspects of the video medium. There was just an openness and honesty in the work I was making then, I was trying to zero in on what motivated me to make work and why, and I think it comes across in those pieces. My current work owes a great debt to that period of focused experimentation.

What are you working on right now, and where do you see your work headed next?

Right now I am in the midst of the preparatory work for a rotoscope animation project, and there are a number of threads I touched on in my exhibition Words Are Not Enough that I want to continue, expand upon and develop further. I also work with a number of other people on various projects and we have some irons in the fire. I recently contributed to a portfolio project through Justseeds about the prison industrial complex that will tour through Canada and has some other exhibition dates slated in the US. I will have a DVD released soon of video collaborations I did with the Milwaukee based experimental noise musician Peter J. Woods, and I am involved with ongoing projects for the BATHAS Internationale, which is an anonymous participatory umbrella collective project that explores how the modernist avant-garde notion of negation as revolt has been taken up by subcultures in contemporary society. I am in discussions with A. Bill Miller of Master-List 2000 about a BATHAS/Master-List 2000 net-art collaboration, but that is still in the initial stages. I will have a review of Jacques Rancière’s The Future of the Image published in the next edition of the FATE journal discussing its use in foundations level pedagogy. Beyond that my wife and I just had our first baby, so maybe I need to find an art practice that just involves me holding my little baby girl…